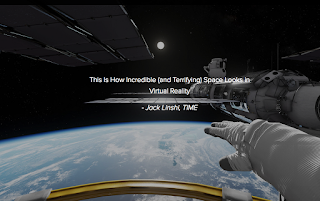 At last year’s Game Developers Conference I had the chance to experience new immersive video environments that are being created by game developers releasing titles for the new Oculus and HTC Vive and Google Daydream platforms.  One developer at the conference, Opaque Mulitimedia, demonstrated "Earthlight" which gave the participant an opportunity to crawl on the outside of the International Space Station as the earth rotated below.  In the simulation, a Microsoft Kinect sensor was following the position of my hands.  But what I saw in the visor was that my hands were enclosed in an astronaut’s suit.  The visual experience was so compelling that when my hands missed the rungs of the ladder I felt a palpable sense of urgency because the environment was so realistically depicted.  (The space station was rendered as a scale model of the actual space station using the "Unreal" game physics engine.)  The experience was so far beyond what I’d experienced a decade ago with the crowd-sourced simulated environments like Second Life, where artists create 3D worlds in a server-hosted environment that other people could visit as avatars.

Since that time I’ve seen some fascinating demonstrations at Mozilla’s Virtual Reality developer events.  I’ve had the chance to witness a 360 degree video of a skydive, used the WoofbertVR application to visit real art gallery collections displayed in a simulated art gallery, spectated a simulated launch and lunar landing of Apollo 11, and browsed 360 photography depicting dozens of fascinating destinations around the globe.  This is quite a compelling and satisfying way to experience visual splendor depicted spatially.  With the New York Times and  iMax now entering the industry, we can anticipate an incredible surfeit of media content to take us to places in the world we might never have a chance to go. 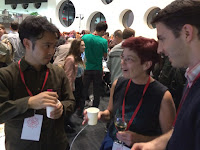 Still the experiences of these simulated spaces seems very ethereal.  Which brings me to another emerging field.  At Mozilla Festival in London a few years ago, I had a chance to meet Yasuaki Kakehi of Keio University in Japan, who was demonstrating a haptic feedback device called Techtile.  The Techtile was akin to a microphone for physical feedback that could then be transmitted over the web to another mirror device.  When he put marbles in one cup, another person holding an empty cup could feel the rattle of the marbles as if the same marble impacts were happening on the sides of the empty cup held by the observer.  The sense was so realistic, it was hard to believe that it was entirely synthesized and transmitted over the Internet.  Subsequently, at the Consumer Electronics Show, I witnessed another of these haptic speakers.  But this one conveyed the sense not by mirroring precise physical impacts, but by giving precisely timed pulses, which the holder could feel as an implied sense of force direction without the device actually moving the user's hand at all.  It was a haptic illusion instead of a precise physical sensation.

As haptics work advances it has potential to impact common everyday experiences beyond the theoretical and experimental demonstrations I experienced.  This year haptic devices are available in the new Honda cars on sale this year as Road Departure Mitigation, whereby steering wheels can simulate rumble strips on the sides of a lane just by sensing the painted lines on the pavement with cameras. 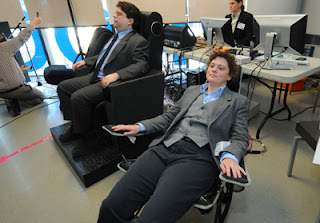 I am also very excited to see this field expand to include music.  At Ryerson University's SMART lab, Dr. Maria Karam, Dr. Deborah Fels and Dr. Frank Russo applied the concepts of haptics and somatosensory depiction of music to people who didn't have the capability of appreciating music aurally.  Their first product, called the Emoti-chair breaks the frequency range of music to depict different audio qualities spatially to the listeners back.  This is based on the concept that the human cochlea is essentially a large coiled surface upon which sounds of different frequencies resonate and are felt at different locations.  While I don't have perfect pitch, I think having a spatial-perception of tonal scale would allow me to develop a cognitive sense of pitch correctness to compensate using a listening aid like this.  Fortunately, Dr. Karam is advancing this work to introduce new form factors to the commercial market in coming years. 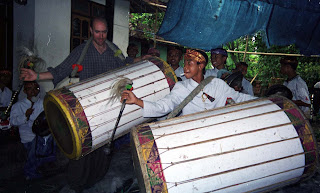 Over many years I have had the chance to study various forms of folk percussion.  One of the most interesting drumming experiences I have had was a visit to Lombok, Indonesia where I had the chance to see a Gamelan performance in a small village along with the large Gendang Belek drums accompanying.  The Gendang Belek is a large barrel drum worn with a strap that goes over the shoulders.  When the drum is struck the reverberation is so fierce and powerful that it shakes the entire body, by resonating through the spine.  I had an opportunity to study Japanese Taiko while living in Japan.  The taiko, resonates in the listener by resonating in the chest.  But the experience of bone-conduction through the spine is altogether a more intense way to experience rhythm.

Because I am such an avid fan of physical experiences of music, I am frequently gravitating toward bassey music.  I tend to play it in a sub-woofer-heavy car stereo, or seek out experiences to hear this music in nightclub or festival performances where large speakers animate the lower frequencies of music.  I can imagine that if more people had the physical experience of drumming that I've had, instead of just the auditory experience of it, more people would enjoy making music themselves.

As more innovators like TADs Inc. (an offshoot of the Ryerson University project) bring physical experiences of music to the general consumer, I look forward to experiencing my music in greater depth.

Posted by ncubeeight at 5:45 PM