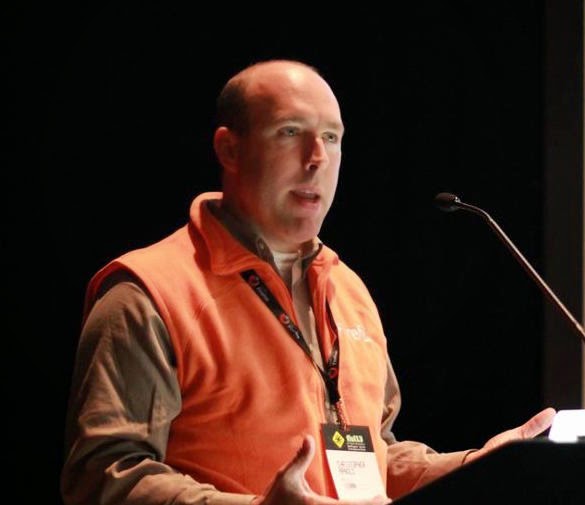 I joined Mozilla as a staff contributor three years ago working on API partnerships, early Firefox Operating System content partnerships for our phones and identity management solutions for the web.  I found Mozilla to be one of the most compelling work environments of my career.  Beyond the prestige of working on a product that reaches 1 in 5 Internet users globally, I found the passion and inspiration of our community and coworkers infectious.

A huge number of people who work on Firefox products and tools are volunteers.  It’s amazing to be surrounded by people who work 100% based on the passion they have for their contribution to the web and its benefits to the global community.  At the FISL 2013 conference in Brazil, I had my first experience working with the Mozilla Representatives and community volunteers.

I bumped into an engineer, André Natal, who wanted to create a speech-to-text engine for Firefox operating system.  (This enables tools like voice-triggered web search and map navigation.)  With a few connections and recommendations, he was on his way, ultimately releasing Firefox OS Marketplace’s first speech recognition app for the Brazilian market and going on to incorporate the capability into our core Firefox operating system.  Another engineer, Fábio Magnoni, helped us bug-fix our emergency dialer for the phones and networked our phone launch with dozens of publishers in Brazil.  Both of these engineers had their own day jobs, but contributing to Mozilla and Firefox products was their passion.

When I asked them why they worked on Firefox products, it was just their own excitement for the challenge and the experience of working with others on a common goal of facilitating the open developer environment that motivated them.

This year I coordinated my first volunteer developer event.  It will be a conference for young developers in the northern region of Corozal in Belize.  This is the story of its inception.

Last spring my wife and I took a trip to Belize on a quest to discover as many Mayan ruins as we could.  A chance dinner at the Cerros Beach Resort became a new side-project for me, when the founders of the resort, Jenny and Bill Bellerjeau, heard about the Mozilla mission and invited us to host an event at their resort.  He wanted the kids of his village to have a chance to learn about the Internet.  A quick post on social media resulted in a ground-swell of interest among my coworkers and friends.

Mozilla has a community of engaged evangelists called Mozilla Representatives who host "teach the web" events in their countries.  Over 2000 are conducted annually around the world.  (Ours is going to be Webmaker Event 6619)

Upon return to the US, I found that Mozilla had no local representatives in Belize.  So we decided to hold a WebMaker event at Cerros Beach Resort, flying in four experienced Mozillians to lead a "teach the web" session.   Four Mozillians from Costa Rica, Mexico, Canada and the UK volunteered to teach 30 kids over their winter holidays.  Three of our US staff volunteered time to prepare the fundraising campaign and prepare donated phones and computers for the project.

We used the crowd-funding platform Indiegogo to raise donations for the project and to keep in touch with our donors about the progress of our campaign.  (Indiegogo gave us a dedicated partner page at https://www.indiegogo.com/partners/mozilla)  We received 25 donations from our friends and connections, 11 donated computers, 30 phones acquired through Mozilla's partner ZTE, 15 SIM cards donated by Belize Telemedia, and the real estate to host the event from Cerros Beach Resort.

This week trainers are headed to Belize.  They will teach students in the region how to make web sites, how to create phone apps and more esoteric topics that initially interested each of the trainers to get involved with web coding.  (Python, site localization, database and web query syntax)

It’s incredible to see a vision go from a simple brainstorm over dinner to a full week-long training event in a foreign country.  Working with Mozillians like Andrea Wood, Mike Poessy,  Kory Salsbury, Shane Caraveo, Matthew Ruttley and Julio Gómez Sánchez is part of what makes me proud to be a Mozillian.

Profound thanks to Bill and Jenny Bellerjeau for their inspiration and generous offer to host this event and for all the participants, donors and volunteers for making this happen!

We hope that others find the Indiegogo platform useful in funding their own developer projects in years to come.


To hear the intros from each of the project contributors visit: https://www.indiegogo.com/projects/corozal-web-training-camp#activity  We will have output from the training on the Tumblr page for the event: http://corozalwebtrainingcamp.tumblr.com/
Posted by ncubeeight at 9:00 AM No comments: